Another Nail In The Live Music Coffin

It’s not the closure of a live music venue or a new piece of draconian legislation being brought in by the government. It’s about an enemy within, who has the power to destroy even the best live bands performance and leave the band or a venue to carry the blame and anger from disgruntled fans. I’m talking about the growing herd of poor Sound (Techs/Engineers) guys who fail to control onstage sound and Front Of House sound.

Fans going to see their favourite bands live expect to hear a performance at minimum on the same level as the bands recorded material and in most cases bands perform to higher performance level live than in the studio.

At the weekend I went down to London to see Death In June on their Heilige tour. Having watched previous live performances on the tour I had high expectations of a great live performance from DIJ. However I reckoned without the amateur ability of the sound guy who totally destroyed the ambience and sound of DIJ’s first 8 songs. DIJ have a very simple live set up vocals, 12 string guitar, some taped samples and an electronic piano for the first four songs. The sound was badly distorted through the left channel from the start, there was far too much bass in the mix. The sound guy made no attempt to come out from the desk to check the sound FOH and never checked the onstage one as Douglas complained of no backing samples on stage and his guitar hadn’t even been line checked as it hadn’t been plugged in! Due to the lack of onstage monitors it wasn’t surprising that Douglas soon had his guitar untuned from having to overplay due to not been able to hear anything onstage.

The most amazing thing was I was the only one shouting at the sound guy about the sound as everyone else just seemed content to accept this crap sound. Douglas kept very calm but it was clear he was unhappy as he apologised about having to ask the sound guy to fix things. The sound guy showed no urgency -he either had no clue about what he was doing or he was deliberately making the sound poor as he didn’t like the band.

Before you dismiss this, when Killing Joke played Roadburn in 2012 the sound guy who didn’t like their music destroyed the sound “The guy who ruined the concert was the guy behind the console/mixing desk. He had an excellent equipment in front of him an set a pitiful sound. Geordie did many requests to modify the setting but the guy behind the console didn’t want to change” taken from the Youtube comments.

When you pay to see a concert you expect to get an acceptable level of sound and performance. If venues hire crap sound guys they deserve to get a bad reputation not the band, but first and foremost people should complain more if the sound is crap. If you went to the cinema to see a film and the film was out of focus I’m sure you would want your money back.

Here is my top 3 worst  live sound experiences in over 30 years of supporting live music which suggests its getting worse:

1. Death In June @ Slimelight, London 15.12.12 – The Sound guy couldn’t manage a simple acoustic performance onstage either due to lack of ability or deliberately setting out to destroy the performance. Criminally poor sound.

2. Fields Of The Nephilim @ The WGT 12.06.11 – Killing Joke had just played a storming set before and expectations were of the same from FOTN. The Sound guy lost all the samples in the mix, one guitar was cleary out of tune a terrible muddy mess of sound. Crap

3. Killing Joke @ The Corporation Sheffield 07.05.06 – Too Loud, Too Distorted fortunately I know the band usually has a good sound. 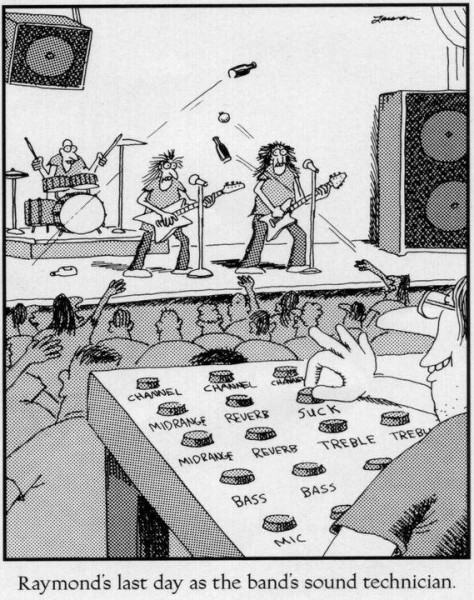