EDEN – The Edge Of Winter 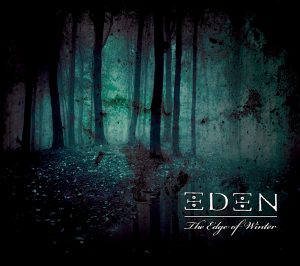 The Edge of Winter is Eden’s first full release in two decades. Recorded in Melbourne at the famed Toyland Studios recorded and produced by Adam Calaitzis.

The album opens with Death Of A Diamond when I heard this track for the first time it was one of those wow moments. I was surprised at the exceptional male vocals which for me rubs shoulders with Brendan Perry, sounding slightly more dulcet, The vocals of Sean reminds of the great singer Frankie Laine, who was famed for his western film songs such as Ghost Riders In The Sky, Rawhide etc. One of those voices that will burn into the memory. Now I’ve mentioned it, this track could easily fit in a western blockbuster about a lone rider, it’s that good! Epic layers of shimmering and rivers driven guitars build a monumental soundscape, fantastic lyrics. Love this song! Lost & Found – A different musical arrangement adds a slightly more gothic, ethereal feel. Great vocals again. Fantastic song! Girl With Violin has a more swirly shoegaze guitar feel with a walzlike drive. Love it! All The Time In The World – reminds musically like a cross between All About Eve, Early Balaam and the Angel and The Church – Yes it’s that good! Topped off with the perfect vocals. Great lyrics too. Suanitriade – This instrumental has a slightly Arabian feel has the musical atmosphere of Dead Can Dance with a splash of Twin Peaks. Nice! The Edge Of Winter – what a great title track and another example of why Sean does rub shoulders with Brendan Perry in this epic vocal delivery. Pure ethereal atmospherics akin to Dead Can Dance. Love it! Returning – more gothic with a hint slower early Mission mixed with a Banshees ballard. Lovely! The perfect vocal again. Perfume Garden – the perfect dark dream pop song to ignite the gothic dancefloor. Epic! December -If you are a fan of The Rose of Avalanche or Salvation you will like this song. Paisley goth. Love it! Great Vocals too! Fryerstown – has the grandiose feel of a speeded up Joy Division’s Atmosphere perforated with an Edgelike guitar burst. Breathtaking! Sky Above – – is again very much aimed at the dancefloor musically a fusion between Dead Can Dance and The Banshees a great gothic tribalistic masterpiece. Love it!
Winter – Another instrumental with a epic feel. Crank Your amp up to max and let the plaster come down 😉
Shame I missed the gig in Leipzig, so I might be I have to put in a trip to Oz to see them 😉 Yet another contender for album of the year in my ears 😉 So get Your copy from