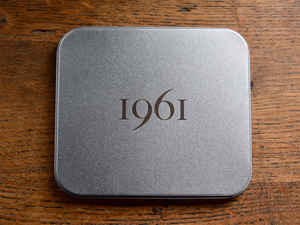 The prolific composers and soundsmiths In The Nursery release their 28th album  1961 The album is inspired by events of 1961 the same year Nigel and Klive Humberstone were born. The album opens with Until Before After classical brooding filmscore seeps into a blissful bass riff shattered with a haunting guitar and a deft snare drum. The perfect switch between male and female vocals. What a great song! Could be this ITN’s new sound going forward? Love it! Torschlusspanik captures the devision of East and West Germany by construction of the Berlin wall. A great intro of assembled strings and a sparse synth will send a shiver down your spine -it could easily be from a filmscore. A chorus of Khrushchev, Kennedy, Berlin grows until it explodes into a bombastic masterpiece, one of the best songs In The Nursery has ever recorded! Fanatastic! Consul features Gladys a 1961 Ford consul. A genius idea that fits like a glove with the grandios church organ. Reminds me a bit of Sopor Aeternus. Epic! Grand Corridor is about the Canadian Red Cross Memorial Hospital in the grounds Cliveden, Taplow where the twins were born. In 1985 it closed and is said to be one of Britain’s most haunted hospitals with it’s 1/4 mile grand corridor. Has a spooky ritualistic feel. Love it! Retrofire celebrates Yuri Gagarin orbiting the earth in Vostok 1. Naturally ITN produce the perfect space soundscape and with the keyboards you can imagine the thrusters being fired on Vostok. Out Of This World! Pacify is inspired the novel Catch 22. A Neofolk classic. Love it!

Solaris is inspired by the science fiction novel written by Stanislaw Lem. What a great track will appeal to fans of Darkher. Epic! Prisoner Of Conscience is dedicated to the founding of Amnesty International. Great french vocals, classical composition and sparse guitars. Love it! The Earth Was Blue takes us back to space and Yuri Gagarin and Alan Shepard looking down on the earth. For me this is the best album In The Nursery have ever released, with a fusing of their early guitar sound, their classical filmscores and their epic martialed percussion. They have reinvented their sound and produced the perfect opus! I hope I will hear the full album being played live in 2018 as it will be something very special indeed. 12/10 – Get it now!