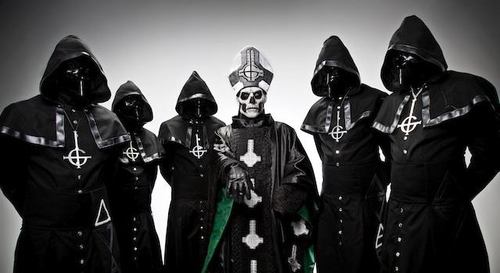 Infestissumam (latin for “the most hostile” or “the biggest threat” in reference to the antichrist) is the latest release from the swedish band GHOST. Their second album see’s Papa Emeritus II & The Nameless Ghouls breaking free from their metallic birth and maturing into a bigger dark rock band with a wider appeal, offering pop hymns that glorify and glamorise the disgusting and sacrilegious.

A very visual live band with Papa Emeritus II in striking papal outfit and skull make up and his masked robed ghouls complete with churchlike backdrop which would more than compete with any horrorpunk band.

The album opens with the title track Infestissumam – the dark hymn like start complete with choir singing in latin gives way to power rock which has a speeded up waltz as its backbone. Per Apera Ad Inferni – Starts with a 20 second power rock blast heralding the addictive real singing(not snarling/shouting or talking) talents of Papa Emeritus II. There’s a hint of fuzztones psychedelic garage rock, great keyboards. Again there is a speeded up waltz driving the song which is very apparent in the chorus and mixes well with the power rock elements in the song. Nice chiming bells towards the end of the song.
Secular Haze-  sounds very like The Fuzztones playing a satanic psychedelic garage waltz damn catchy track! The video is below.

Jigolo Har Megiddo – great singing from Papa Emeritus II. Musically reminds me a bit of The Horrorpops but with an added harpsichord. Damn catchy infernal pop hymn. Ghuleh /Zombie Queen is the longest track on the album at 7.29. Has a very atmospheric haunting melancholic start with whispers of a walz and epic slices of synth reminds me a bit of The Who. Then at around 3 mins it changes into horrorpunk / deathrock fuelled track which would  put quite a lot of such bands to shame with their efforts. A great track for the dancefloor! This is the newest song on the album and maybe an indication for the next album.

Year Zero – the track that caught my attention after a friend posted the video of it online I had to hear more. The most perfect, catchy, disturbing power pop sing along song about satan. A great demonstration of Papa Emeritus II vocal talents again. Great use of choirlike backing vocals ensure an epic feeling in the chorus. Love it here is the video

Or The Uncensored version 😉

Body & Blood – catchy perverted powerpop rock opus. Idolatrine – musically again has a hint of The Horrorpops with an almost ska like hammond organ sound and a splash of “don’t fear the reaper” Catchy. Depth Of Satan’s Eyes – the most obvious track on the album but still a good horror power pop rock track.

The album closes with Monstrance Clock – a munsterslike waltz gives way to an infectious powerpop fuzzy singalong capturing the satanic temptress theme running through the album. But be warned the album may take posession of your Stereo and refuse to leave, until several musical masses have been performed!!!!