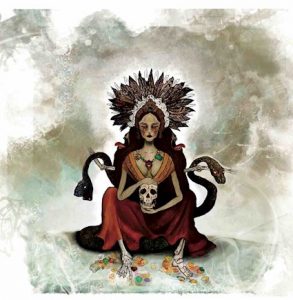 The highly anticipated new album from Japan Suicide  – ‘Santa Sangre’ is due for release on 14th February 2018. The album opens with the title track Santa Sangre – has a postpunk holy mass feel and is the perfect intro.

Circle comes next a ritualistic intro melts into relentless intensive waves of postpunk musical attitude. Reminds me a bit of Noir Desir, Great! Dealer possibley my favourite track on the album due to the pulsing 80’s bass and a great mix of shimmering and searing guitars to burn a hole in the dancefloor. Love it! El Ritual sees the pace drop into a sea of atmospherics, reminds me a bit of ‘Cactus World News’. Nice! Blown Away reignites the pulsing postpunk push to the dancefloor, with a splash of ‘The Cure’. Lovely! For Every Flaw –luscious intense jingly jangly guitars add to the wall of postpunk sound which will appeal to fans of Into Paradise. Great track! Fate has a more gothic feel to it, aided by the dark, desolate sounding keyboards splashing against deft drumming and shoegaze guitars. Rejoice – has a hint of U2’s ‘Stories For Boys’ album mixed up with ‘The Doors’ –  psychedelic postpunk atmospherics. Love it! Thus Bad Begins builds the the postpunk psychedelic atmosphere further. Lost Daughter and the temperature rises until it bursts into a searing postpunk classic. Nice! Carcosa – I can see this being the intro track for all future live performances. Postpunked Blade Runner. Epic! A great follow up to ‘We Die In Such a Place’