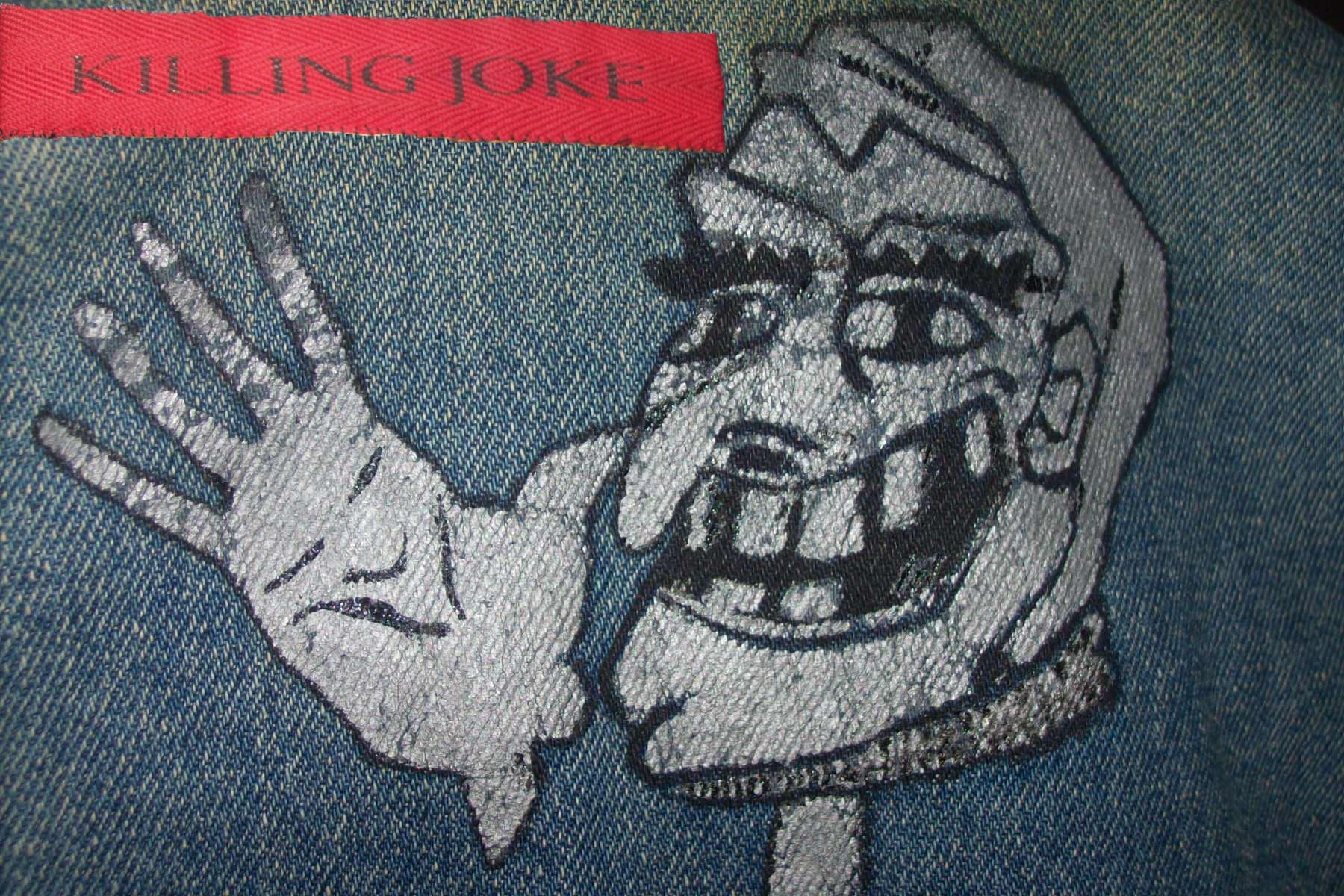 2013 is Killing Joke’s 34th anniversary and to mark the occassion they are planning to commence a tour across the globe to promote their forthcoming Singles + B-Sides album due out next month. 2013 is my 28th anniversary since I first saw them live and became a devoted follower.

Killing Joke chose the Zombie Club in Corby for their warm up gig. Driving down from the North and exiting the A1 it definately gave the impression of being in the middle of nowhere. (even the service station restauraunt at the exit had been closed and was derelict). Drove into Corby and found refreshment at the fortuitously named “The Raven”. 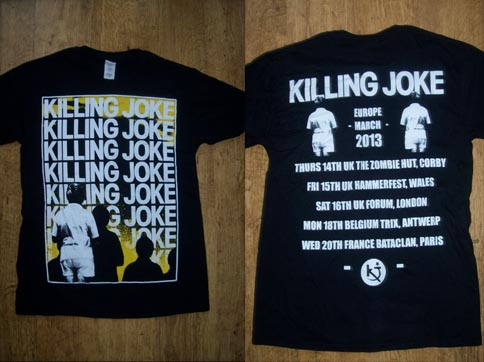 Headed back up the venue which from the outside looked like a typical clubhouse for the rugby club which had been converted for music use. Entering at the rear I got the impression that in addition to 250 capacity there were quite a few friends of the organiser on the guestlist. The stage was about the 2/3rds the length of the stage at The Fenton in Leeds with a similiar sized room ( The Fenton in Leeds is 90 capacity). Diamond Dave had somehow managed to squeeze all the bands gear into the small space with extra guitars precariously stacked at the side of the stage. Upstairs was the bar and merch desk which occupied a petite “L” shaped balcony. 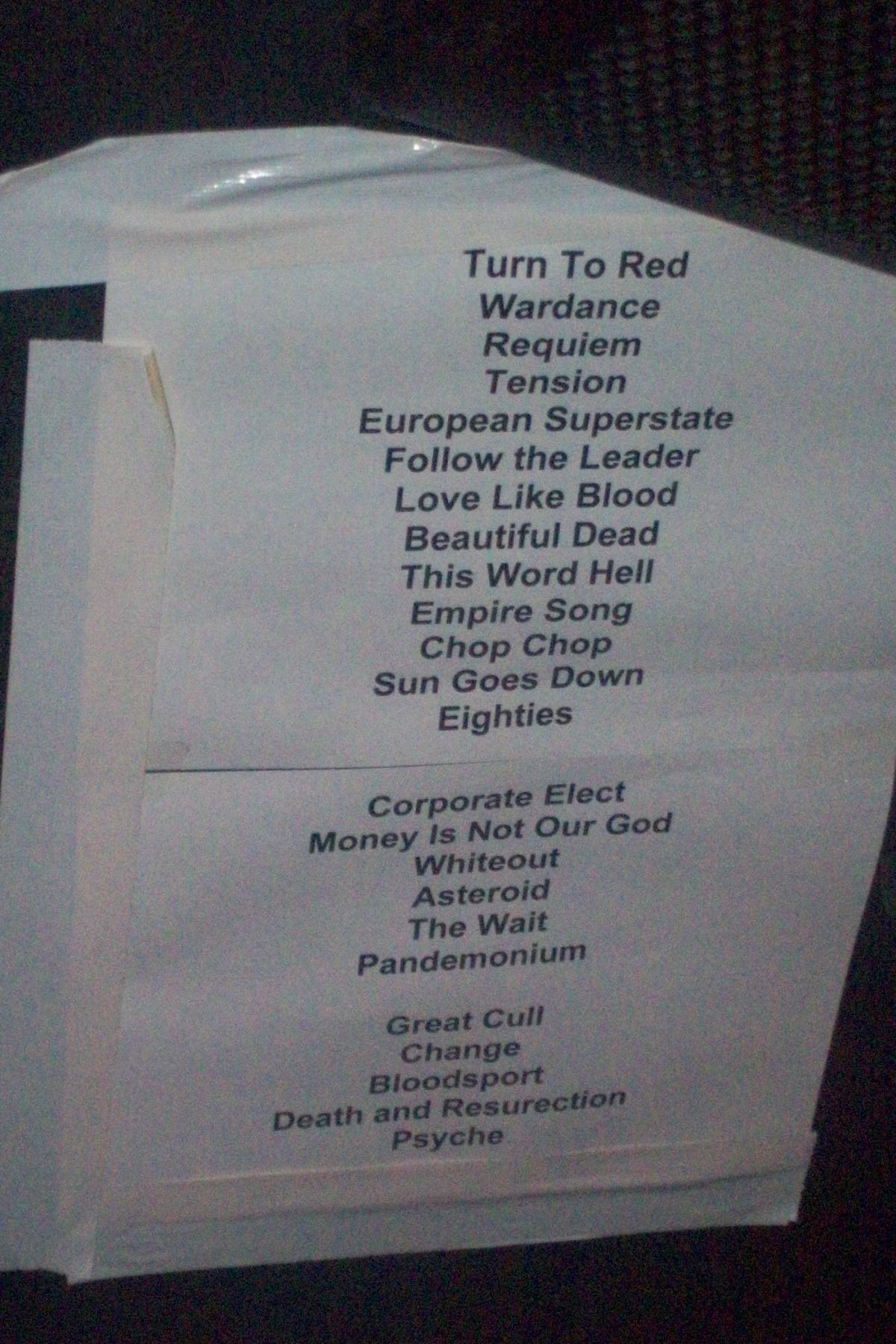 I ended up standing at the front and was able to get a picture of the intended setlist for the night. The setlist looked quite impressive to any newbie or anyone familiar with Killing Joke’s extensive repetoire. I have all of Killing Joke’s music and was bit disappointed that it didn’t include more from their single’s collection especially those A-Side songs that haven’t been played often or for a number of years live like “Let’s All Go” (To The Fire Dances), “Me Or You”,”A New Day”, “Kings & Queens”,”Adorations”,”Sanity”,”Exorcism”,”Millenium”,”Jana”,”Democracy”,”Loose Cannon”,”Seeing Red”,”Hosannas From The Basements Of Hell”,”In Excelsis” or “In Cythera” rather than 7 album tracks and some of the usual great tracks which ignored some of their epic albums.

Standing at the front watching “DD” do his last minute adjustments it amazed me to see how easy it was people to put their drinks and coats over and down the side of the monitors due to no onstage security and crowd barrier for the safety and security of the stage and the audience.

Joke took the stage to the dying strains of “Masked Ball” and looked very happy to see the compact crowd waiting to see them. They kicked of with with “Turn To Red” 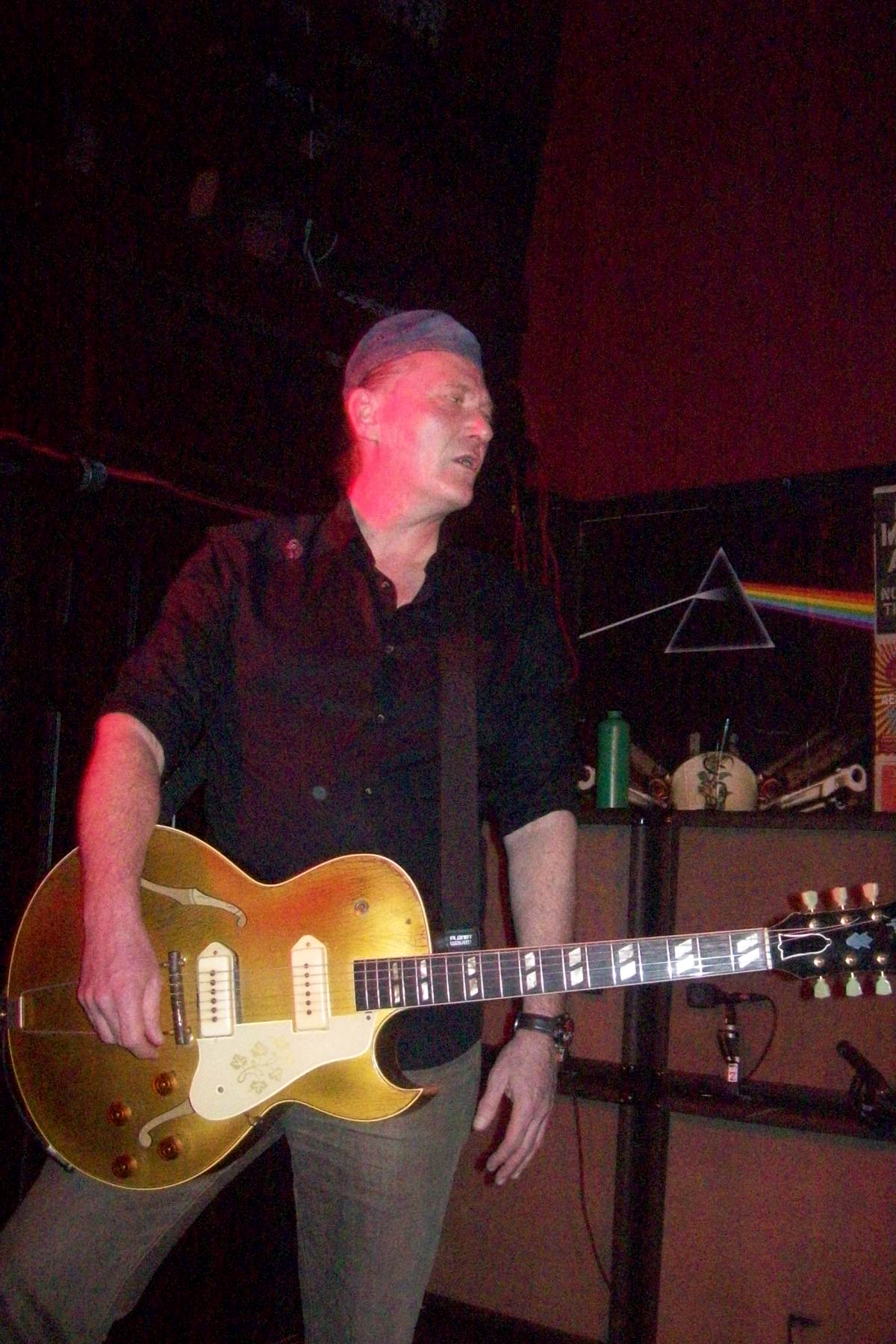 Before launching into the blistering power and fury of “Wardance” and continuing non stop for 1 hour & 40 mins!!!!

If you look carefully you can see me in front of Jaz it was hot, sticky,a mass of electrically charged bodies and band in unison. The surge from behind built up during “Requiem” it was getting to the point when carrying 180 kg XXL guys on your back becomes not just no fun but dangerous due the lack of an adequate crowd safetly barrier to prevent crushing. 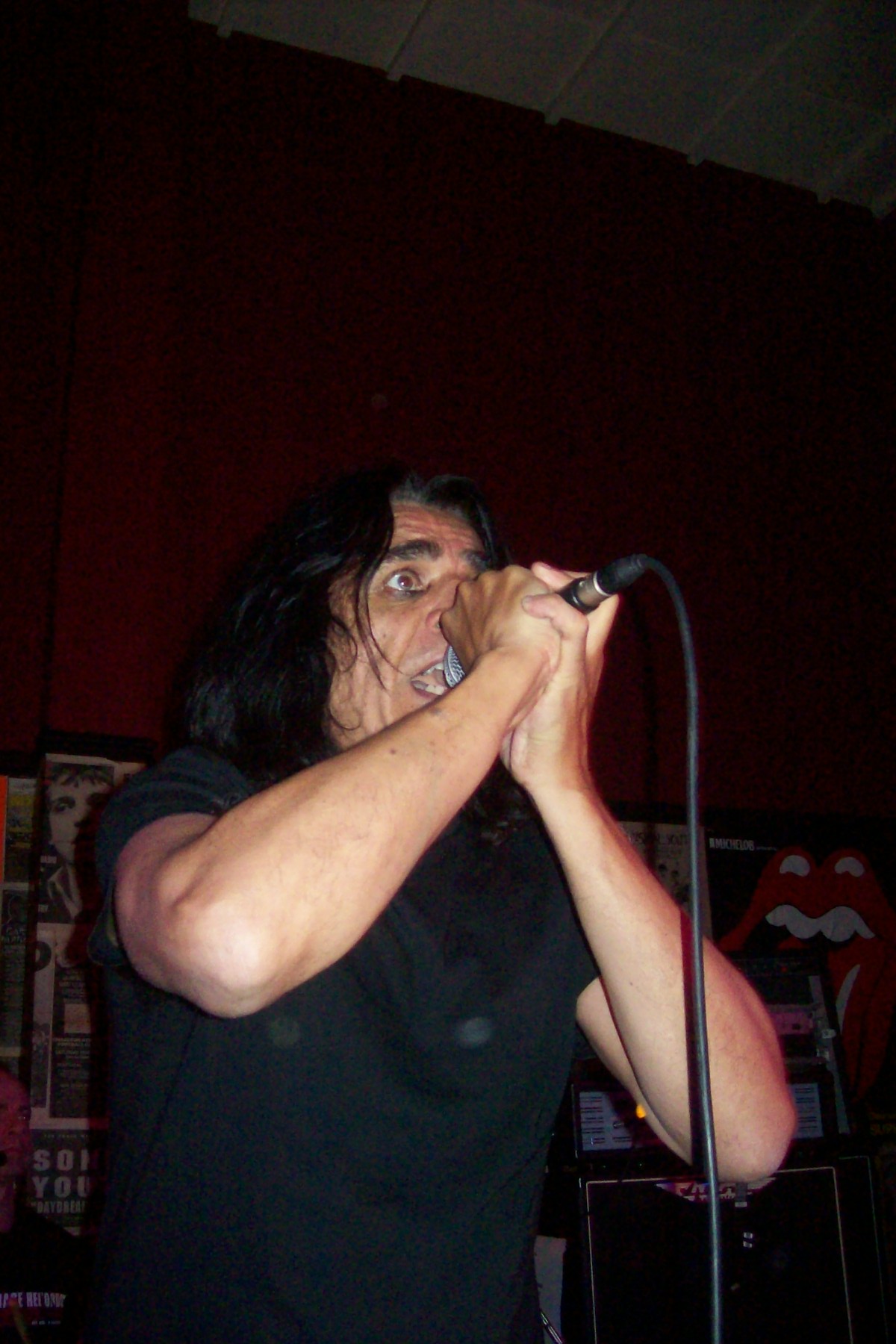 During “Tension” it got so bad that my friend and myself were unable to enjoy the vantage point any longer & gave way to the XXL’s who just wanted to be at the front at any cost. This clearly underlined that this venue was inadequate for a band of Killing Joke’s stature and following. Crowd safety and security should always be a priority at live gigs.

Wet with sweat I made my way upstairs to get a drink and to try and get a view of the stage. It seemed very packed upstairs and it was only possible to get glimpses of the band upstairs. 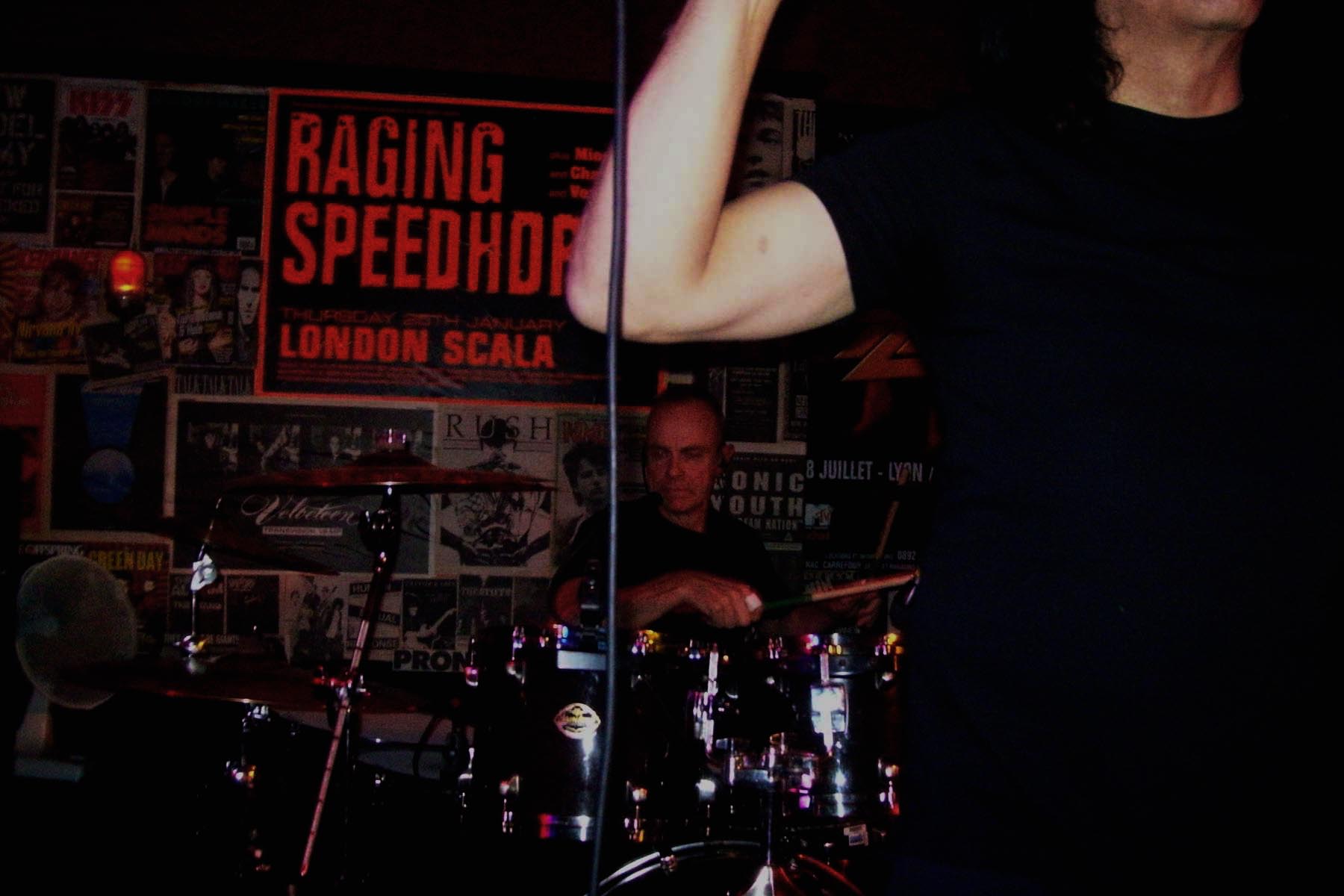 The band continued full steam ahead through the setlist above “Love Like Blood” sounding great and recalling the memory of “Raven” “Empire Song” always a favourite to dance to. By my reckoning there were closer to 300 people in the venue as I counted 90 upstairs with at least twice as many downstairs. It definately felt like too many people for the venues capacity. 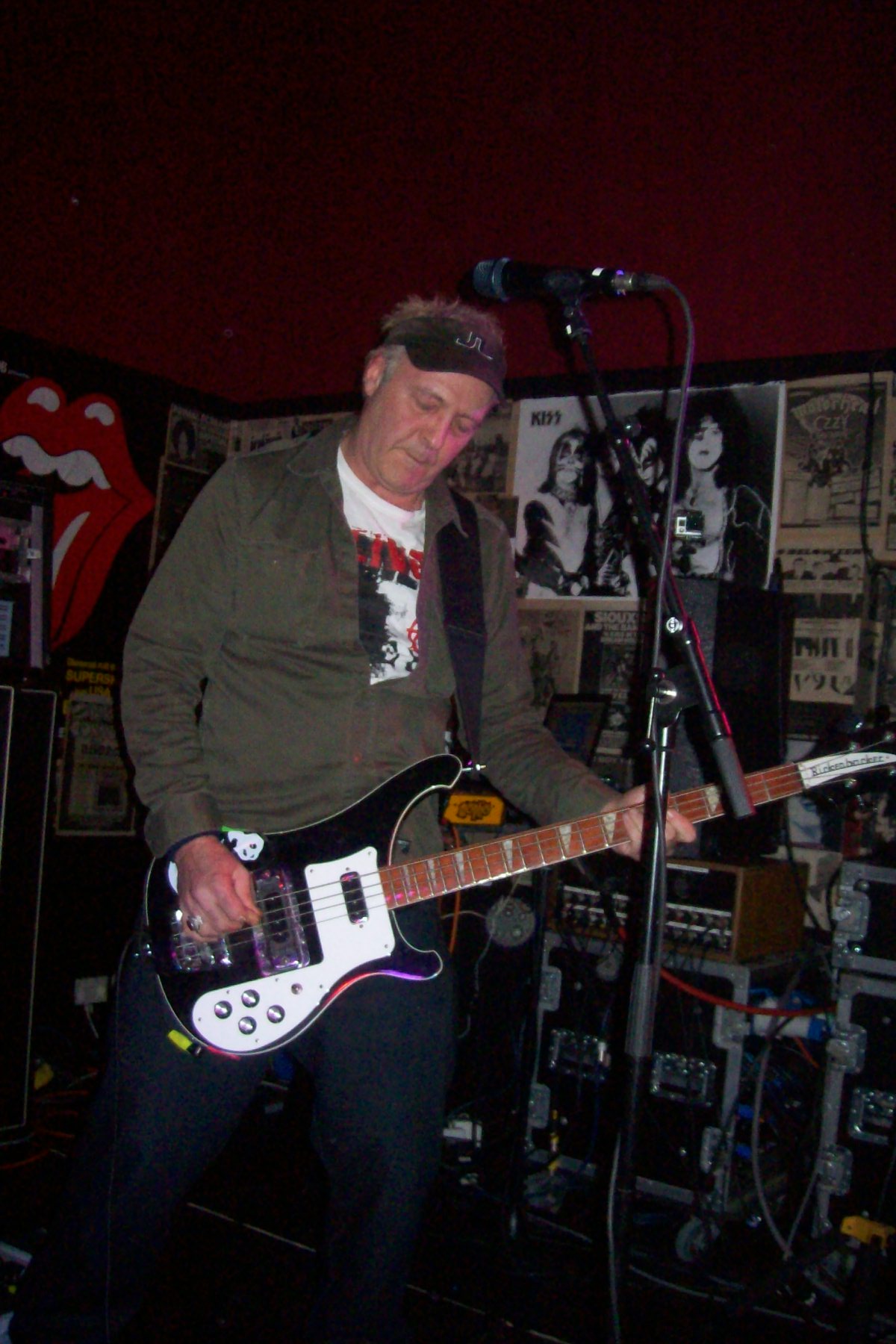 The set was brought to a close with “Pandemonium” which seems to get played more often than not which is a shame as the album of the same name is great. but so many great tracks and singles that should be played from it!

At this point it was apparrent that the band was running behind the 11pm curfew and had to cut the set short from the one above, so for the encore they played the Great Cull & Psyche. The band had given their all. An epic gig and hopefully they will play more of their singles collection live. Killing Joke are one of the few bands who can still produce the power, tightness, delivery and muscianship which blows other bands from their era  and most new ones away!. 34 years of delivering great concert performances long may it continue.  If there is one band you should see in your life before you die it is Killing Joke !!!!!!!!!!!!!! 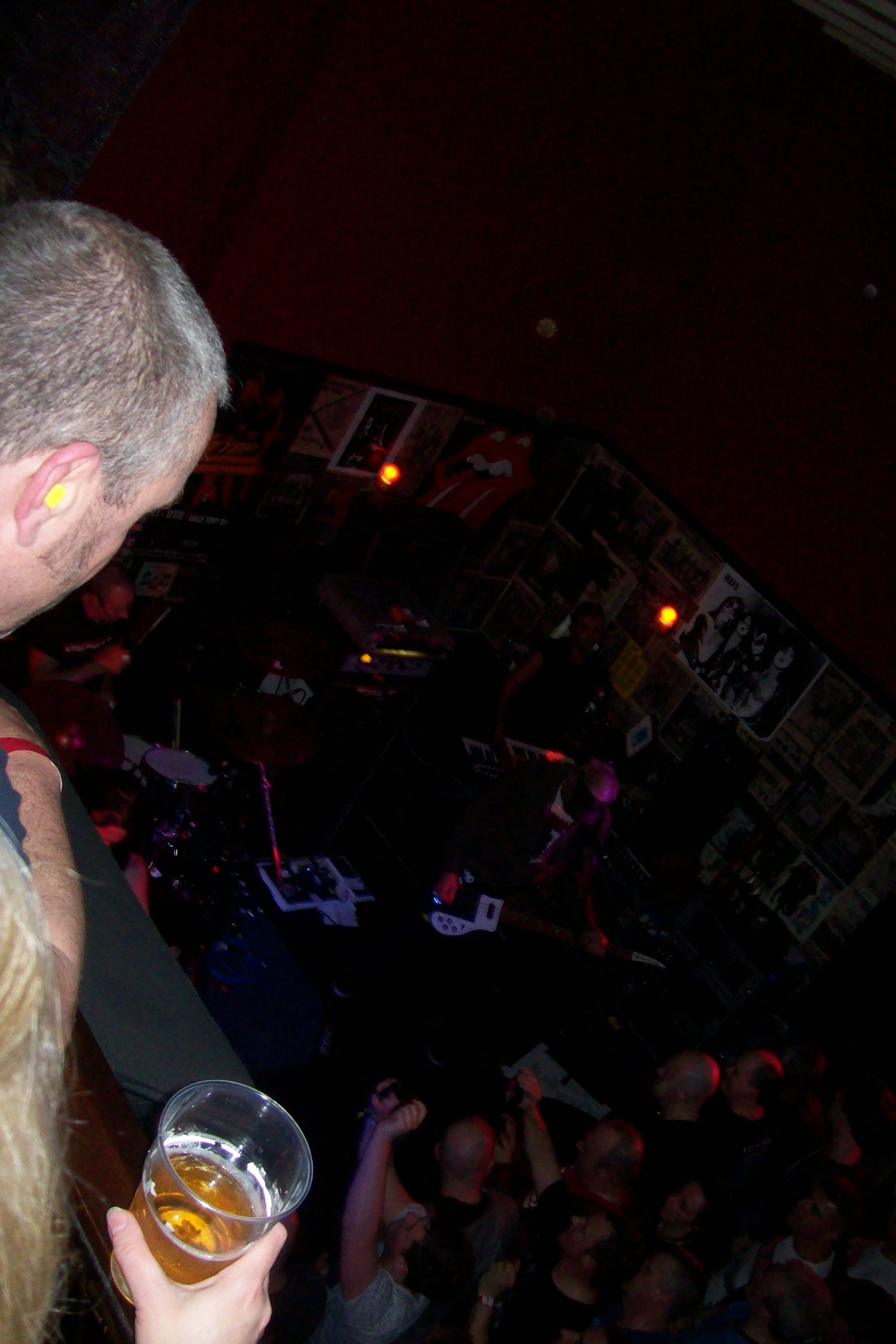 The Zombie Hut was too small for such a popular band, Great as the gig was I wouldn’t return there again.