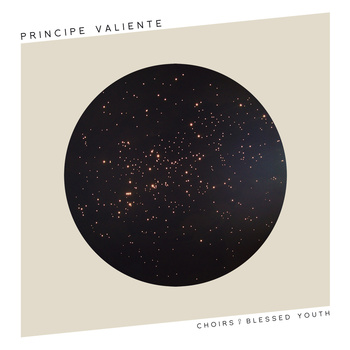 Choirs Of Blessed Youth is the second album from Sweden’s Principe Valiente and follows their fantastic debut album “Principe Valiente” featuring the epic track In Your Arms. I remember looking forward to seeing them live at last years WGT only to be let down by crap distorted muddy sound at venue which was a real shame for the band!
Definately one of the albums I have been waiting to hear. The album opens with The Son I’ll Never Be what a powerful well crafted song! Fernando has one of those vocal styles that sounds totally original, a wall of keyboards, pounding bass and an well crafted guitar hook ensure an epic opening to the album! Take Me With You was a good choice for a single from the album and sits shoulder to shoulder with In My Arms. Great lyrics about lonliness, on this song alone Principe Valiente deserve to be a lot bigger than they are now. Once this song enters your skull it will never leave! She Never Returned reminds me of classic Editors/Interpol and is the second single from the album. Great power and polished delivery! Love it! The Dream -is the longest track on the album at 9.46, a sublime slice of shoegaze! Reminds me of The Cure’s Disintegration album colliding with Curve Wow! Wasted Time is possibly my favourite track on the album. Destined to be a big smash on the dancefloor. Love it! The Fighting -has a hint of Joy Division dusted with powerpop guitar sounds like classic 80’s new wave/postpunk. Great track! Choir Of Blessed Youth – is the shortest track on the album, more a short atmospheric interlude. Fiction -I love the way this song builds from a whisper to a storm of serene sound. Great song! Dying To Feel Alive – is pure magnificent melancholic power pop! Temporary Men – another great dancefloor track with a punked up/interpol feel. Love it! The album closes with Flower In You a slice of dark melancholic shoegaze with almost a hint of twin peaks. Great stuff!

Look forward to hear this live with perfect sound as it will something special indeed!