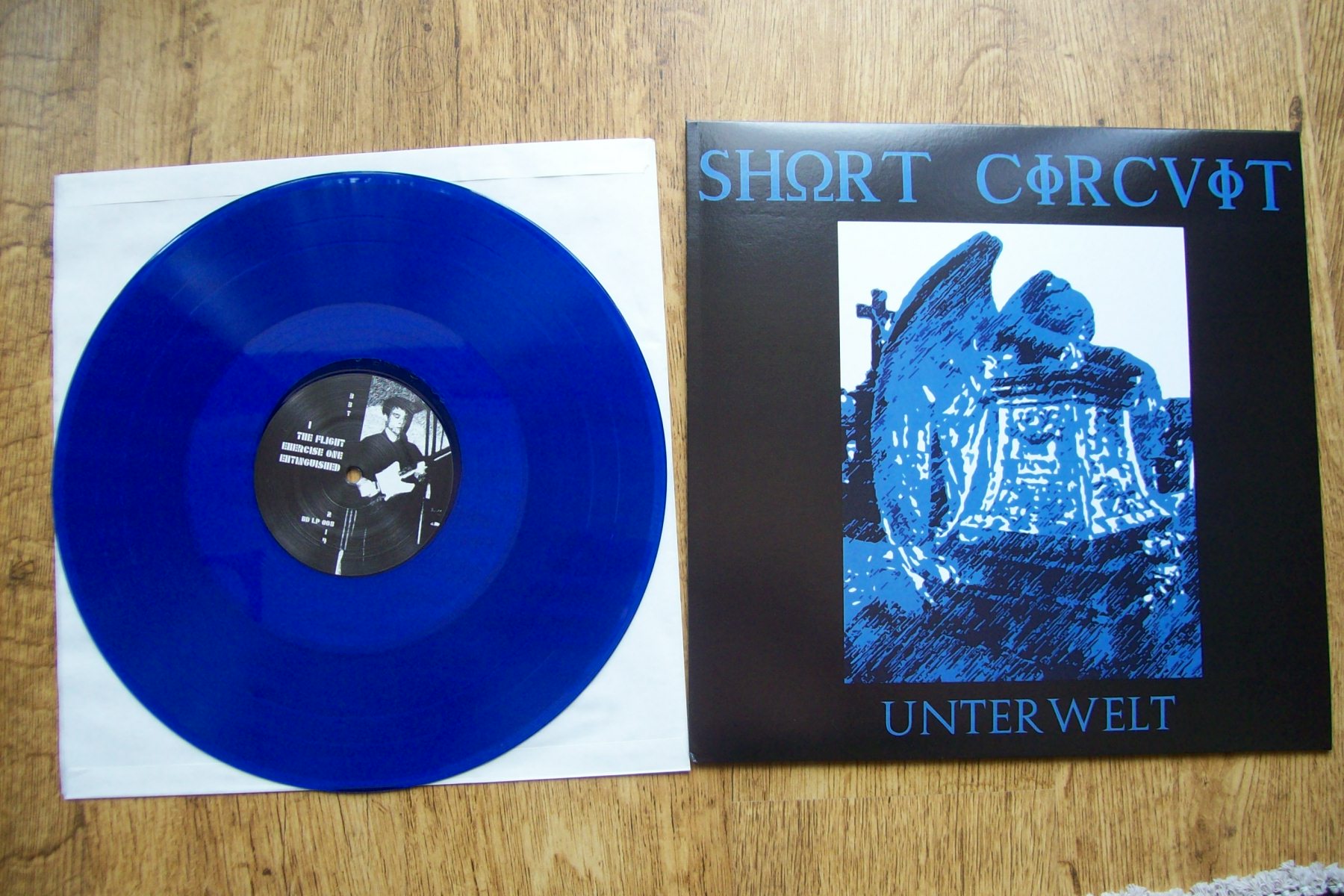 First up is a lovely release from Short Circuit, on beautiful electric blue clear vinyl limited to 300 copies. The 6 track album captures the best of from Luxembourg’s Short Circuit home recordings, which have a very nice rough edge, and would not be out of place in the 80’s despite being recorded in 1992.
The first side opens with The Flight which was a total shock as it reminds me strongly of In Death It Ends, but with a stronger coldwave, postpunk edge, and maybe a hint of Clair Obscur and Joy Divison thrown in. A great opening track. I wouldn’t be surprised if there ends up being a modern cover of such an epic song. Love it!
Exercise One is a Joy Division cover given a more experimental avant garde intro and colder feel due to the excellent minimal keyboards. Very nice jangling guitar and sparse vocals. Sounds familiar but original at the same time!
Extinguished is a live track which creates a very cold and sinister soundscape. Love it! Exit – again sounds like a beautiful collision between Joy Division and In Death It Ends. Great song! Unterwelt has a very coldwave minimal sound, which may give you disturbed dreams. Last track is a cover of The Cure’s – 17 Seconds– a far colder and minimalistic feel compared to the original. Great cover! 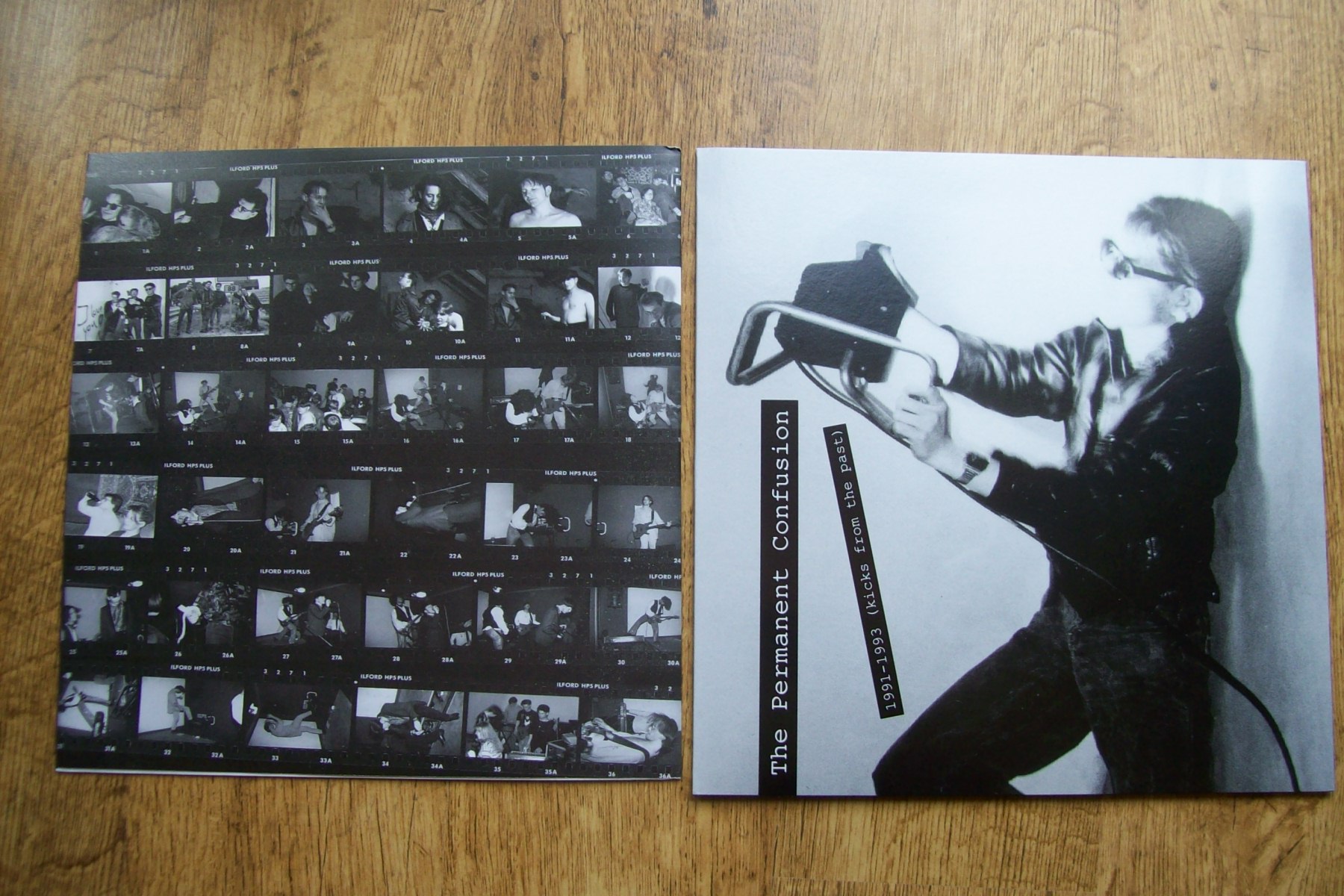 The Permanent Confusion were from Germany and here we have a best of compiled from variou tapes. This release comes on both limited clear (200)and black vinyl (300). The album opens with Full Moon which reminds me strongly of early Phil Boa & The Voodoo Club great! Eternity has a hint of Lucie Cries, meetsCorpus Delecti. The Keyboards remind me of Satura from Lacrimosa but with more punked up guitars. Nice! Selling Culture To The Barbarians has an Iggy Pop Blah Blah Blah feel with teutonic punk sound. Love it! The Watermelon Man reminds me of mix between Gentle Ihors Devotion, Sisters Of Mercy, Cassandra Complex maybe a hint of Crazyhead/ Julian Cope in the vocals. Love the quirky keyboards! I’ll Wait For You – has an early Alien Sex Fiend vibe but a lot deeper and darker. Great cold experimental synths! Stoned Again -Has a hint of Neva, sprinkled with Sisters Of Mercy, Drama Of Spheres – yes its that good! The Irreal Light Of The Sun has a throbbing bass line, Missionlike guitars but reminds me very much of The Essence and maybe a hint of Neva. Love it! 1984– has very strong Popoi Sdioh feel and will be a great track for the dancefloor. Love the 80’s space synths! Julie– reminds me of The Nightchild in a personal ballad. No-One Ever Leaves has a hint of early Cure, U2, an 80’s classic recorded in the 90’s. Love it! The Deep Blue Sea – has a very strong Lucie Cries feel with maybe a hint of Into The Abyss. What a great album a must for fans of coldwave! 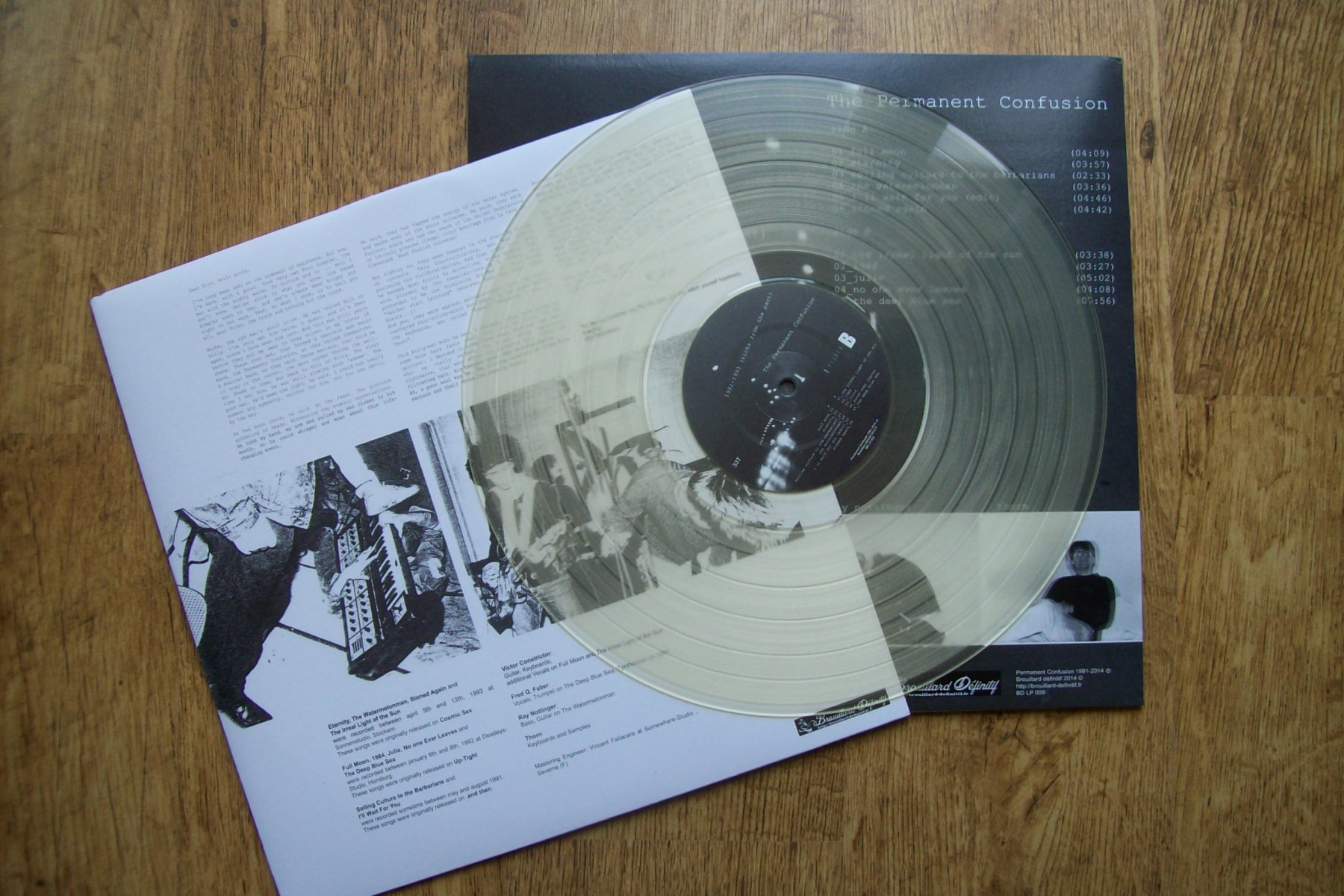 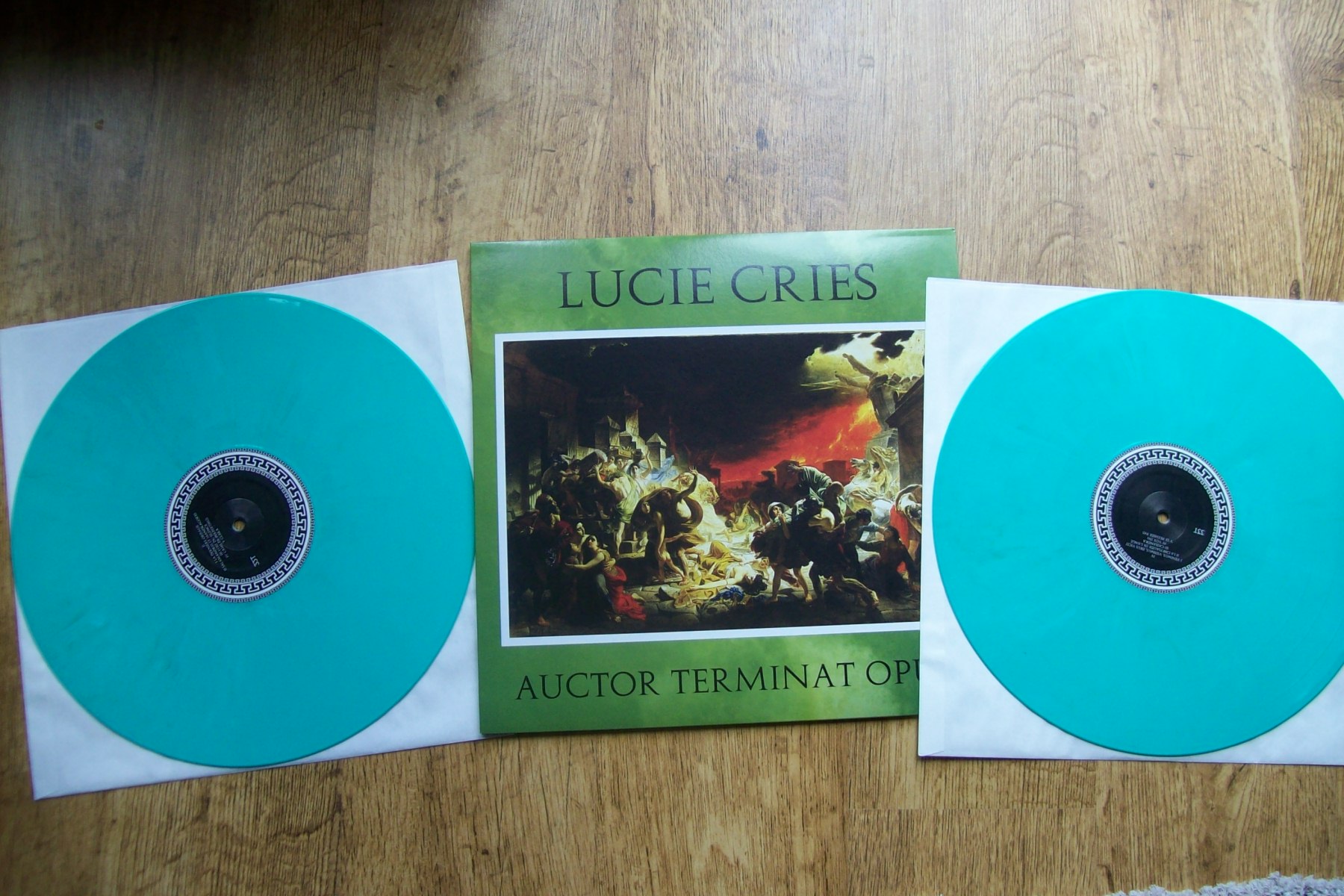 A truely magnificent compilation of one of the legends of coldwave music Lucie Cries is released on classy green marble vinyl and a limited double album of only 300 copies. Despite being 25 years old Lucie Cries still sounds as exciting as it did upon the first listen. Love the album sleeve. The first side opens with Les Amants De Lucie a full on collision between coldwave and postpunk. A great song to dance to on any dancefloor! La Longue March demonstrates the originality of Lucie Cries which can be heard in a lot of later bands. A defining sound of French coldwave! Exceptional. Le Manège -what a great bass hook! Love the sparse cold keyboards and guitar which make this a coldwave classic! Timisoara -The height of a storm breaks upon a deft ritualistic drums and washes into ice cold waves of synth, smashed on the rocks of an epic driving bass. Guitars call out like a seagull in a dead sky. They don’t make instrumentals this good anymore. Wow! Side two opens with a loud bang with La Dernière Ordalie another smash for any dancefloor! Pure bombastic coldawave. Love it! Salamandres Et Mandragores could be the blueprint that Corpus Delecti followed. Another exceptional track that I have had the pleasure of dancing to numerous times. A classic! L’Ost Du Silence – see’s the tempo drop with almost a coldwave pop track. Nice! L’Ame De Perperthus – has hint of Play Dead another song fit to pound any dancefloor. Wow! Clara closes side two yet another classic Lucie Cries track.
Side three opens with Alea Jacta Est the defining sound of Lucie Cries and yet a another powerful instrumental showing the true level of musicianship. Great! Soeur De Sang – don’t be fooled by the drop in tempo as this ticking bomb explodes around the chorus. Epic! Ultima Verba – Yet another exceptional track, love the tribal drums and blistering guitar another smash from the dancefloor! Icare – might be a short song at 1.57 but it grabs your ears and feet and won’t let go until it finishes! Vestale – exceptional coldwave! Messaline – Wow! Another track to melt the dancefloor with! Venimus, Vidimus, Deus Vicit heralds the opening of side four with a strong Goth Rock feel compared to the previous tracks. La Chrysalide De L’Ange is yet another coldwave classic from Lucie Cries Love it! Cassandra -just when you think it can’t get any better it does. A song to blow the cobwebs away! Wow! Vox Dei – Hard to pick a favourite track on this exceptional compilation but this comes close. What a great track! Le Premier Pas -closes the album with yet another exceptional Lucie Cries song.
What a great album from an exceptional band Lucie Cries. Recommended for fans of coldwave, postpunk, wave and originality! Buy It Now!

To Order these great releases and more please visit