On 30th June 2017 Cherry Red Records release a musical monster 5 CD set “Silhouettes & Shadows” billed as the Gothic Genre defining compilation. Packaged in a deluxe hardback book format, featuring 80+ tracks and over 18,000 words of sleeve notes (including artist notes) and unseen photographs make this a worthy addition to anyone’s music collection, whether you be an avid collector of Gothic music or someone wanting to discover more about this dark genre of music this will open to your mind the the dark aural pleasures of Gothic music. What I like about this compilation is there are some tracks I have never heard before, which isn’t surprising as I still discover new and old bands everyday from across the world of Gothic music. Also it doesn’t just have the big hits which is refreshing as most bands had great albums and not just singles.

CD1 opens with Joy Division’s Shadowplay which would figure in most people’s top five tracks by this highly influential band. The Birthday Party – Release The Bats is where Nick Cave started before moving onto a highly successful solo career. Rema – Rema – a short lived band but some of the members went on to play with Adam & The Ants and Psychic T.V among others. A new track for me 😉 PARANOIA – Shattered Glass- another band I am hearing for the first time a bit of a cross between Xmal Deutschland and Toyah. Great 😉 Section 25 – Charnel Ground were signed to Factory Records along with Joy Division. 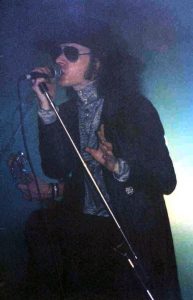 Nice to see not the usual Sisters Of Mercy tracks included but the classic Floorshow. Great choice! 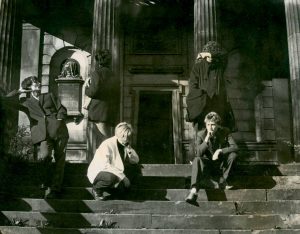 Clock DVA – The Female Mirror – embraces the experimental side of minimal electronics. UK Decay – The Black cat -a slam dance classic 😉 Alien Sex Fiend – Dead & Reburied a great version of a classic! Love And Rockets – Seventh Dream Of Teenage Heaven – The members of Bauhaus minus Peter Murphy Nice! The Associates – Q Quarters -one of those bands that straddled several genres of music as they became more well known. In Excelsis – Carnival Of The Gullible first time I have heard this track reminds me of a mix between Killing Joke, Play Dead and Sex Gang Children – Great! Nevilluxury – Feels Like Dancing wartime – another new track for me a sort of a cross between Roxy Music and Simon F – love it! 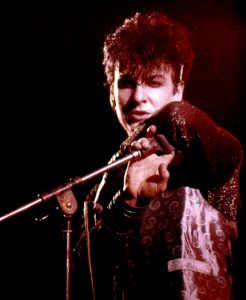 Flesh For Lulu – Vaguely Human – a great live band. The March Violets – Crow Baby -one of their excellent early singles! All About Eve – D For Desire an exceptional track from a great band! Folk Devils – Beautiful Monster yet another new discovery reminds me a bit of Crazyhead. Nice!

CD2 opens with the Public Image Ltd and their great song Flowers Of Romance. Danielle Dax’s – Bed Caves follows this nicely. Next up is The Southern Death Cult and Moya another great track which captures the tribal passion of Gothic music. 1919 – Caged continues the slam dance on the dancefloor. Epic! 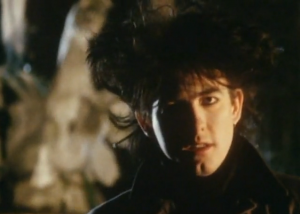 The great mix of tracks continues with The Cure’s – Hanging Garden is definately one of my favourite Cure tracks 🙂 S-Haters – Solitary Habit is again another band I am hearing for the first time – damn catchy! Next is another favourite Dead Can Dance – The Arcane what a great track from a great band with one of the best male vocalist Brendan Perry you will find anywhere. The flagship of 4AD’s formative years:) Love it! Years On Earth – Saving Face and another new band for me sounds like a darker more minimal Human League Love it! An early track from one of John Peel’s favourite bands. 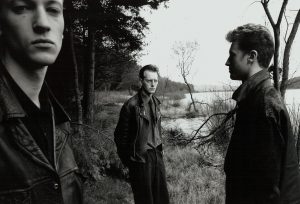 In The Nursery – Breach Birth. Still very much going strong and definately band to catch live! Play Dead – The Tenant – a classic track a sort of a cross between early Alien Sex Fiend and Killing Joke and PILlike vocals – lovely! Part 1 – Ghost – yet another new band to my ears. Another good discovery dark punk;) 13th Chime – Cuts Of Love – more batcave than most batcave bands love it! The Tempest – Ice Cold In sounds musically like a cross between The Banshees fused with The Stooges What a great track! 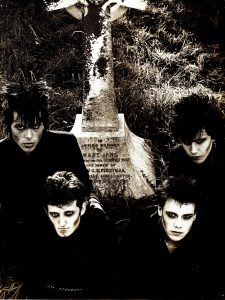 Screaming Dead – Night Creatures another classic which will have you jumping around the room! Bushido – Among The Ruins could be an outtake from a Virgin Prunes album with it’s dark quirkiness. Nice! Portion Control – Fiends – nice experimental minimal electronics. Actified – Creation brings the Cd to and end with a Bang!. Great mix of tracks.

CD3 Adam and The Ants – Tabletalk- captures the band during their punk/ postpunk stage before they became the darlings of the New Romantic movement. Balaam And The Angel – Darklands – A great introductory track to popular hardworking band in the Goth scene. Love it! The Legendary Pink Dots – Love Puppets – great minimal synths! Artery – Into The Garden was of course Slinks first band before The Mission and was another favourite of John Peel. 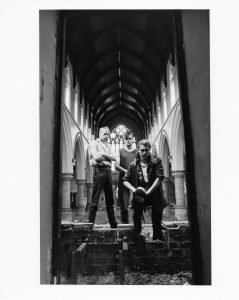 Salvation – Girlsoul released as on The Sisters Merciful release label were another band that built Leeds into Goth central in the 80′. Great track! The Chameleons – In Shreds a great track to dance to, one of my favourites and an epic choice for the compilation! Schleimer K – Fugitive Kind the first time I have heard this band quite a charming track. 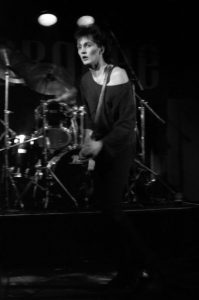 The Bolshoi – By The River – Another one of my favourite bands with the distinctive vocals of Trevor Tanner. The band has lots of great songs so nice to see a more obscure one featured. Gene Loves Jezabel – Screaming For Emmalene – More a glam rock band like by Goths than a Goth band. That said quite a good track. Lowlife – Gallery Of Strange – lesser known band but still as important. And Also The Trees -Out Of The moving Life Of Circle – great ethereal down tempo track. Siiiii – Is Still – A great introduction to a forgotten band from Sheffield. Love it! 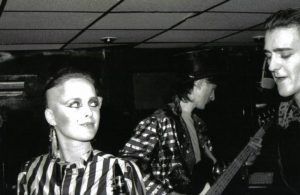 Tabatha’s Nightmare – Heroin (live at the batcave) – Another new band for me but a good one showing the more creative experimental side of Gothic music. Brigandage – Angel Of Vengeance – a positive punk mix which could be a forerunner of shoegaze. Great track! Penetration – Stone Heroes – The song reminds me a bit of a female version of Kirk Brandon. Love it! 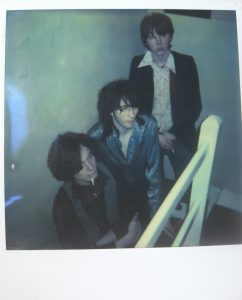 The Rose Of Avalanche – L.A Rain – An epic track from another Leeds Goth band 😉 some great lyrics “The Skies are Black and the sun doesn’t shine” in a song about lonliness, loss and drug abuse with strong psychedelic feel. Epic!

CD4 opens with Furyo – Legacy.The band formed from the ashes of UK Decay. The Mission – Stay With (radio edit) me good to see this track included rather than the usual tracks which tend to feature on compilations. The song was written post Sisters Of Mercy pre Mission by Wayne Hussey. Epic! Nico – Saeta – shoegaze before shoegaze existed. Love it! In Camera – Fragments Of Fear – yet another band that I’m hearing for the first time and I like it a lot 😉
Dance Chapter – Anonymity – yet another unknown band for me but what a great track filled with dark passion and power. Love it! 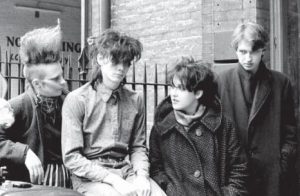 Ausgang – Sink Into You – A great track produced by Andi Sex Gang. Cocteau Twins – In Our Angelhood – a great choice for inclusion in the compilation as a popular track in Goth clubs in the 80’s. Still a big influence on bands today. Love it! Sunglasses After Dark – Morbid Silence – A lovely dark dirge including violins. Excellent! Fields Of The Nephilim – Trees come Down (original). Another inspired choice for inclusion on the compilation featuring the original single from their Burning The Fields E.P. A great introduction to their Spaghetti Western Gothic sound. Love it! 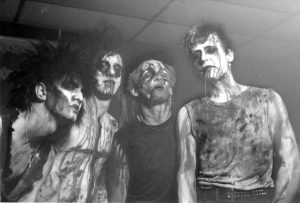 Anorexic Dread – Tracey’s Burning – has a glam goth batcave sound. Red Lorry Yellow Lorry – Take it All – another band that made Leeds goth central in the 80’s/90’s. A great choice for inclusion! Tones On Tail – Burning Skies – Another side project after the split of Bauhaus with Daniel Ash on vocals. Nice! Blood And Roses – Spit On Your Grave – postpunk written around the video Nasties bill and Mary Whitehouse. 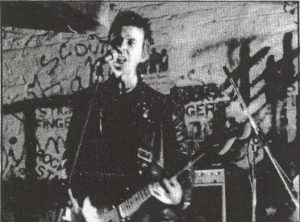 Threat – High Cost Of Living . first time of hearing this band. Great postpunk. I’m Dead – Storm Pause – has been lifted from a demo cassette and again is band I have never heard before. postpunk goth fusion. Nice! Zero La Creche – Last Year’s Wife – a classic which has featured on lots of compilations with a vocal style similiar to The Psychedelic Furs. Great track!

CD5 -opens with Bauhaus – Stimata Martyr- a great track from one of the pioneers of Goth music! The Wake – Patrol – not to be confused with the US band The Wake. This Wake features Bobbie Gillespie pre Primal Scream and was released on Factory Records. Love it! Specimen – Returning From A Journey – one of the flagship bands from London’s batcave with their mix of glam and goth. Great track! Theatre Of Hate – Original Sin – another inspired choice for inclusion. A band that still plays live and features the distinct vocals of Kirk Brandon 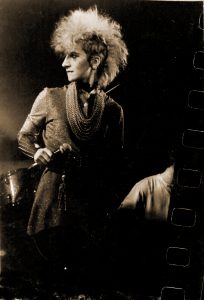 Attrition – Birthrite – An early track from the much loved Darkwave act see a Siouxsie vocals let loose in a field of minimal electronics. Love it! Sad Lovers & Giants – Things We Never did – Another inspired choice. Great track! The Damned – Dr Jekyll and Mr Hyde – The band that released the first punk single then embraced goth and Dave Vanian always looked quite goth from the early days of the Damned. A great live band still active today. Gloria Mundi – The Hill – another new band to my ears and reminds me a bit of Tones On Tail. Dali’s Car – His Box – was a collaboration between japan’s Mick Karn and Bauhaus’s Peter Murphy great track with lovely fretless bass. Love it! Inca Babies – Diseased Strangers Walz has an air of Nick Cave about it. Nice! 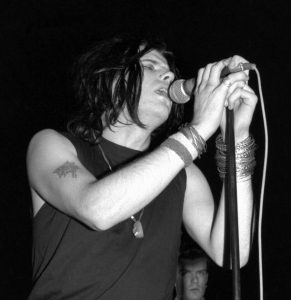 Death Cult – Ghostdance was a name change from the Southern Death Cult and saw Billy Duffy joining on guitars and laying the foundations of what would become The Cult. Great track which would inspire a pack floor with Goths and flat tops slam dancing together 😉 Modern Eon – Euthenics – Glad to see this track included. Love it! Ritual – Mind Disease – A great gothic tribal dancefloor song. 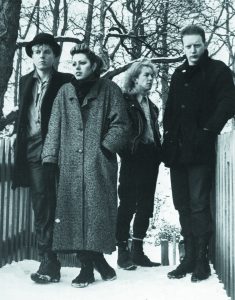 Skeletal Family – She Cries Alone – Another good choice for Inclusion with a dancefloor clasic. Love it! Bone Orchard – Jack – sounds like a great fusion between Siouxsie and The Birthday Party. Great track! Hula – Ghost Rattle- My first time of hearing this band and like all the less familiar tracks invites me to find out more 😉 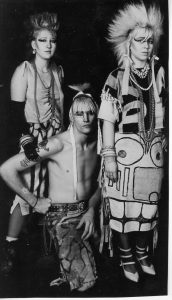 A lot of love, time and effort has gone into this release judging by the extensive notes, pictures and selections of bands and tracks. I really hope this will be a success for label, and maybe relight the smouldering fire of Gothic music. Also it would leave the door open for a sequel as there is bound to be a band someone could think of which should have been included, but that said for me it’s one of the best Gothic compilations in years! It’s Released on 30th June so get Your copy from