Cancellation of Concerts, Club Nights and Festivals Due to Covid No Longer Acceptable in 2022

The lame excuse of  “its cancelled due to covid/omicron/the virus” can no longer be accepted in 2022. This will lead to the decline of live music,  djing and club nights.(maybe that’s what governments want?) Watching live music video streaming for me has damaged live music and djing as it’s like listening to a cassette tape being played on a tape deck which hasn’t been cleaned for years. Governments everywhere need to be looking at how they can support promoters to put on twice the number events to cater for demand.

Cancellation of concerts, clubnights and festivals due to Covid in 2022 is no longer acceptable and looks like nothing but a lame excuse by promoters and governments. Laibach, the Soft Moon, Clan of Xymox, Suicide Commando, Front 242, The Futurama Festival, Ploho  have all cancelled tours/events Between January and May this year without offering a full explanation why – as “due to Covid or you know why” is not acceptable if cited by bands (unless they haven’t been vaxed or are suffering from it and can’t travel). It has already been proven that it’s safe to hold music events with mask wearing and testing. 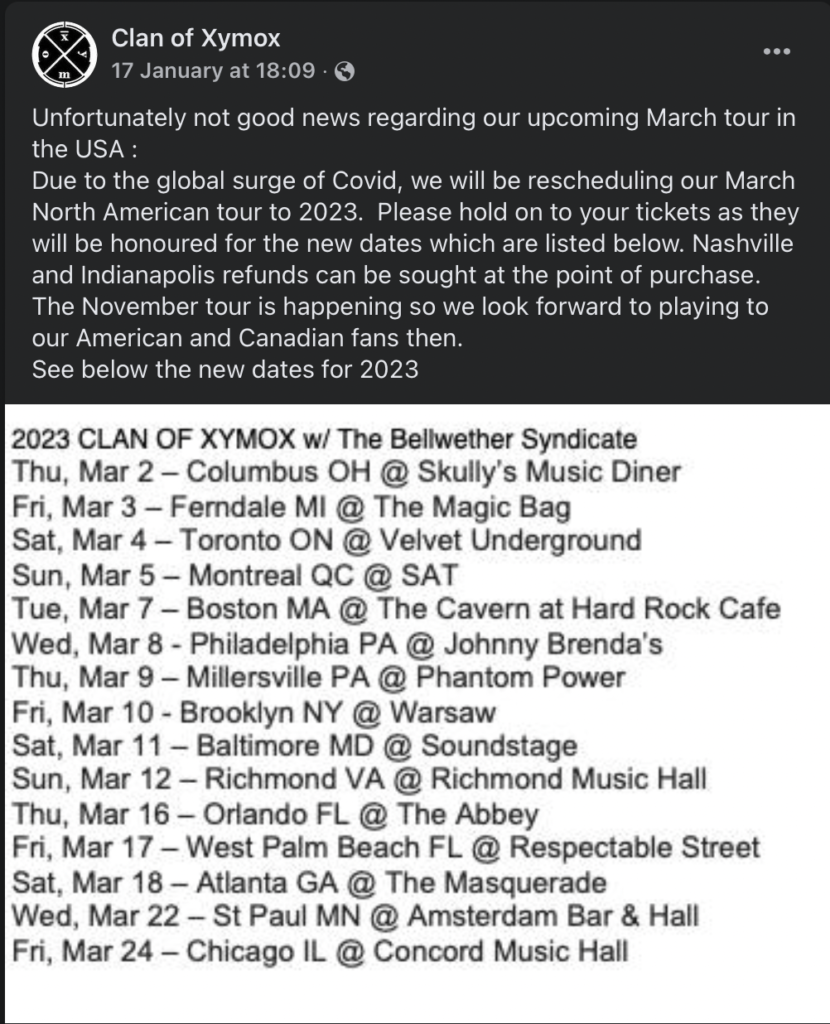 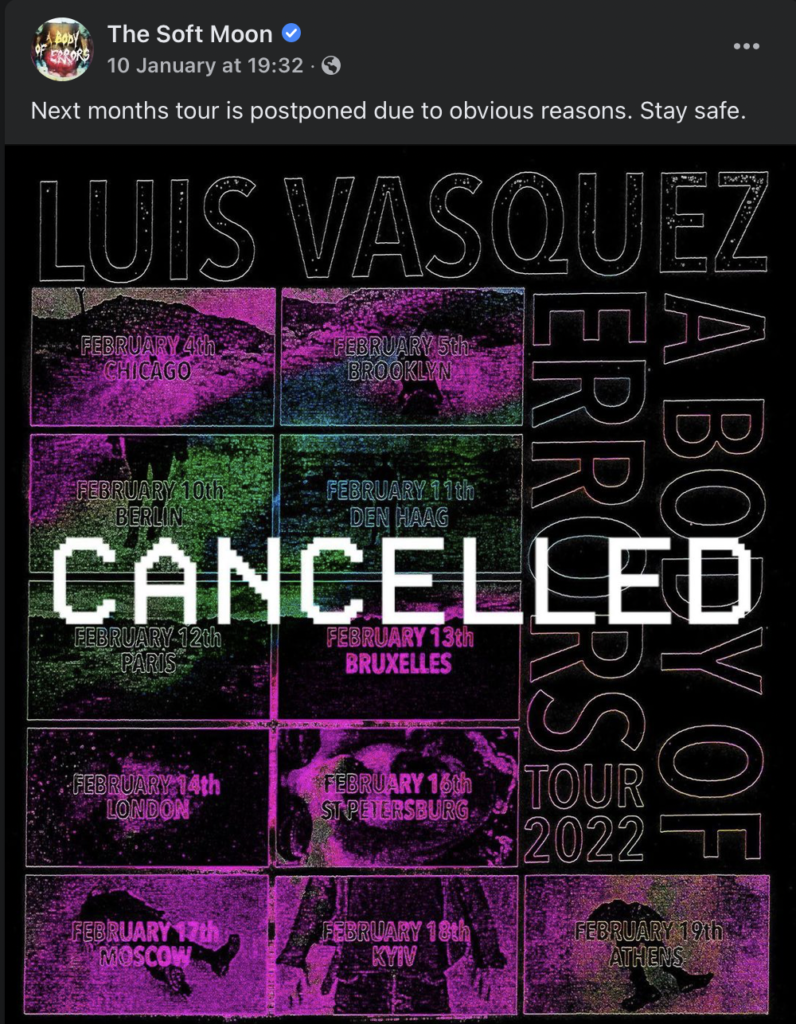 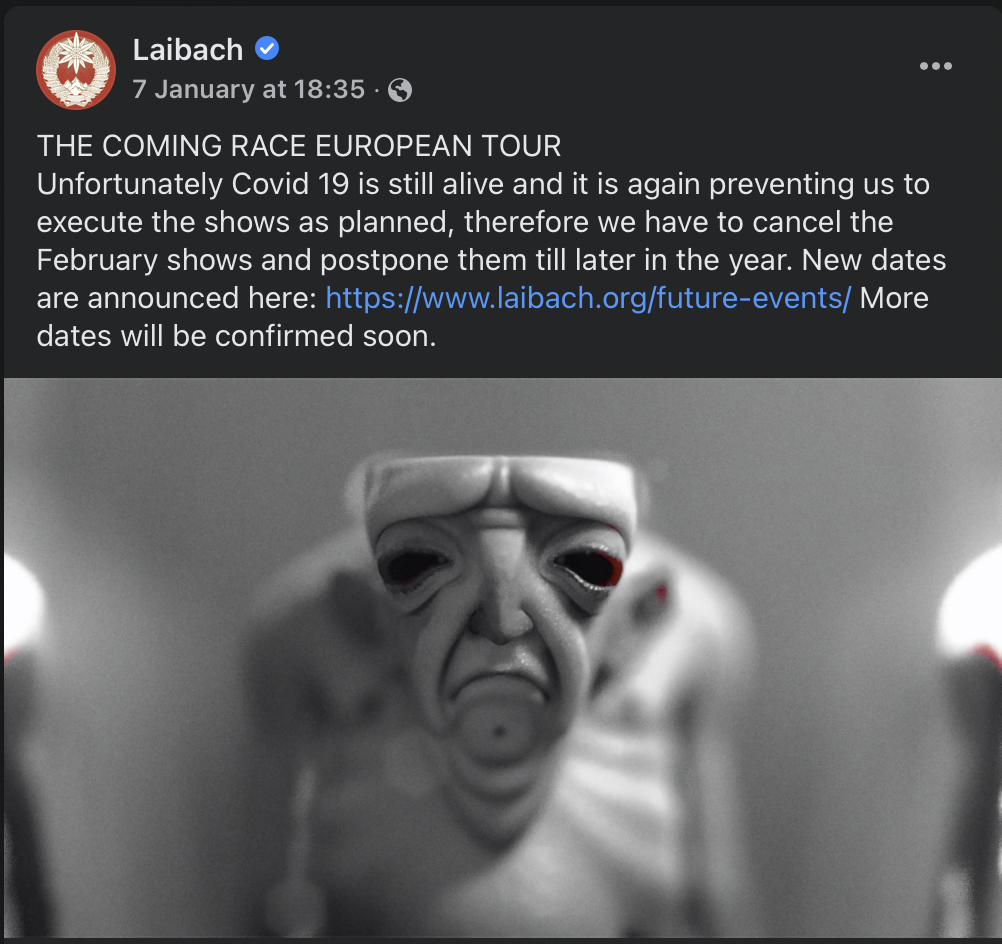 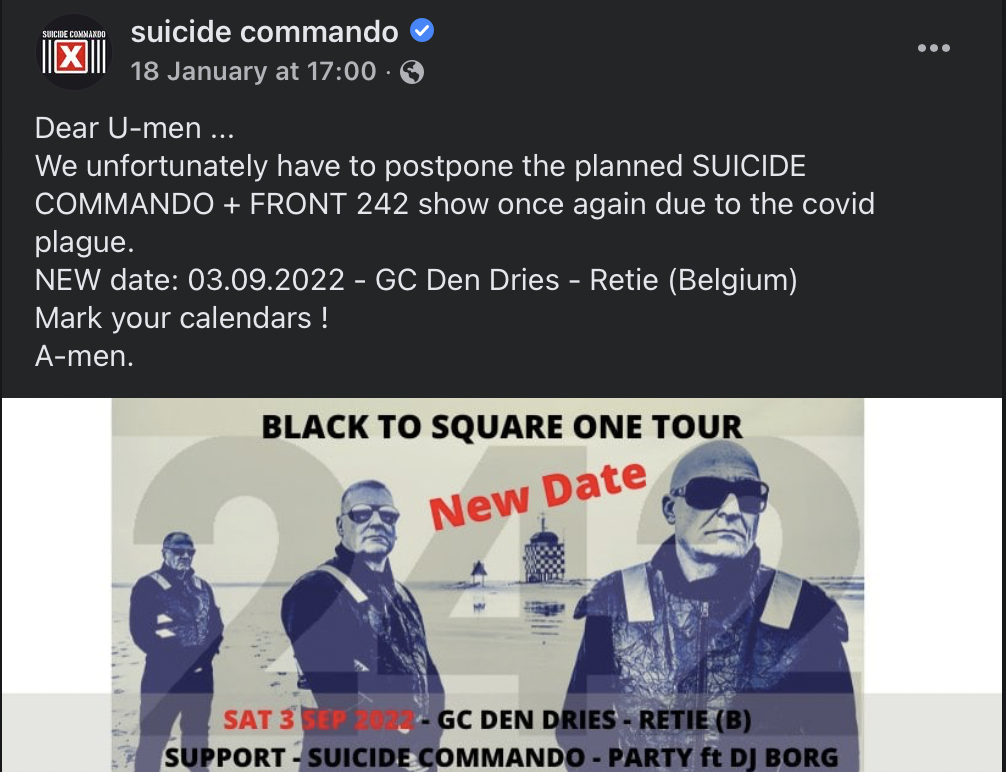 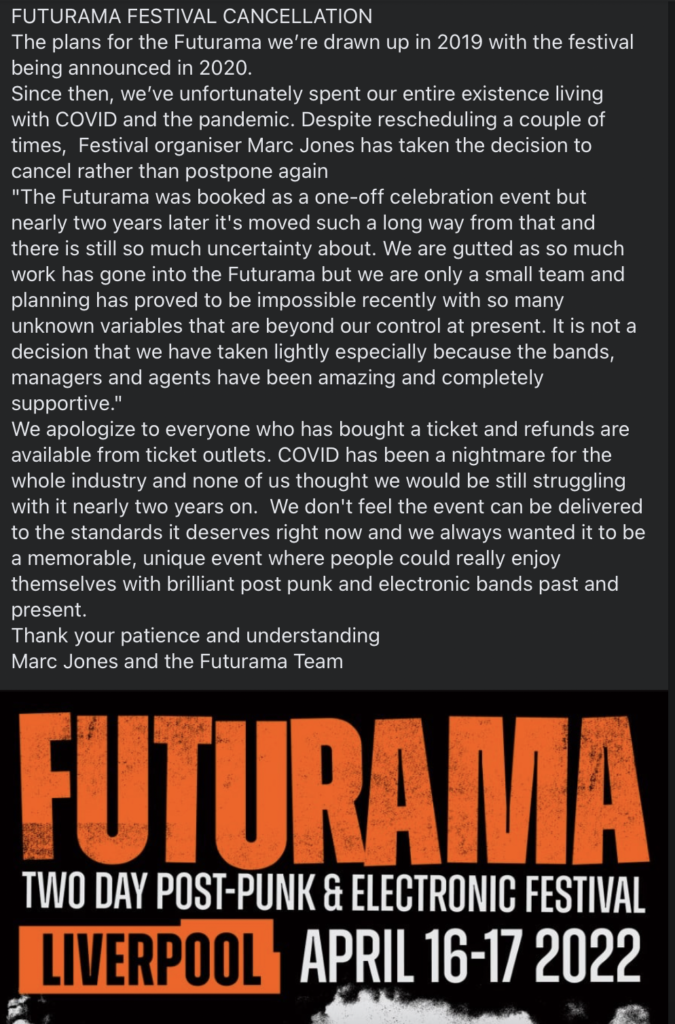 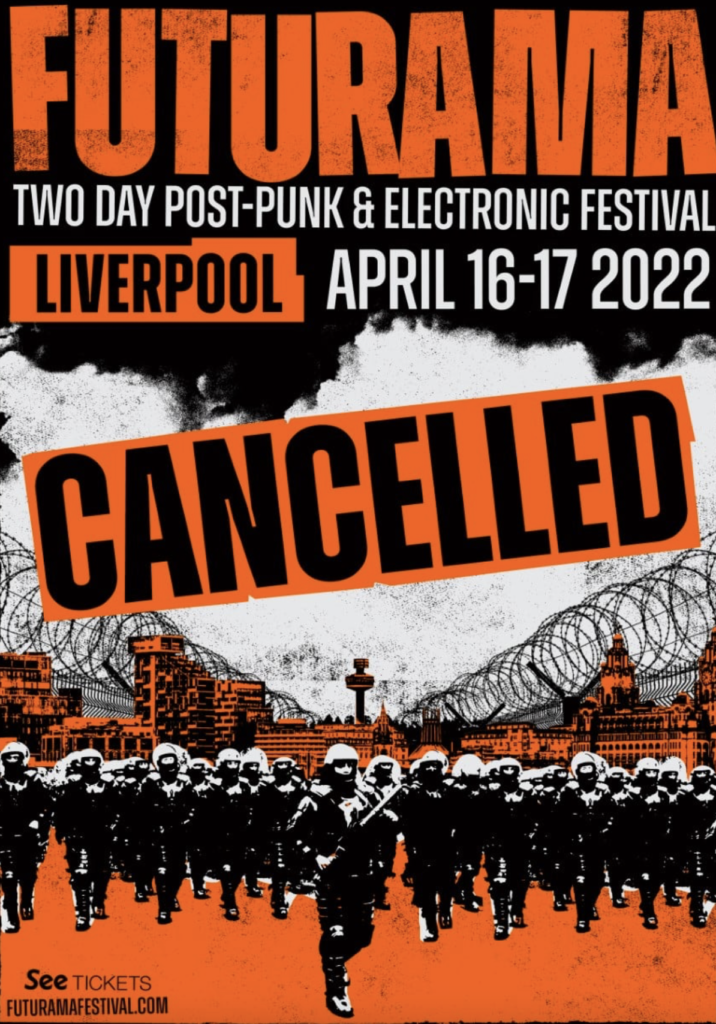 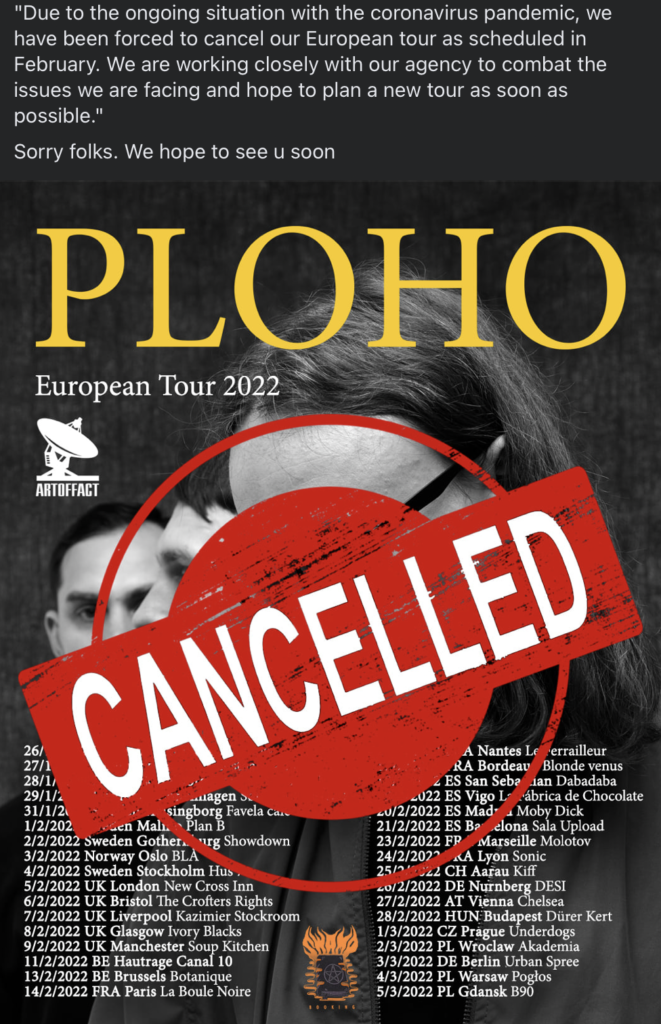 If people don’t want to get vaxed and die that’s their choice but why punish everyone else. I would quite happily wear a mask and take a test for any live music or DJ event as Vaccination alone doesn’t stop people carry it or passing it on or getting ill. 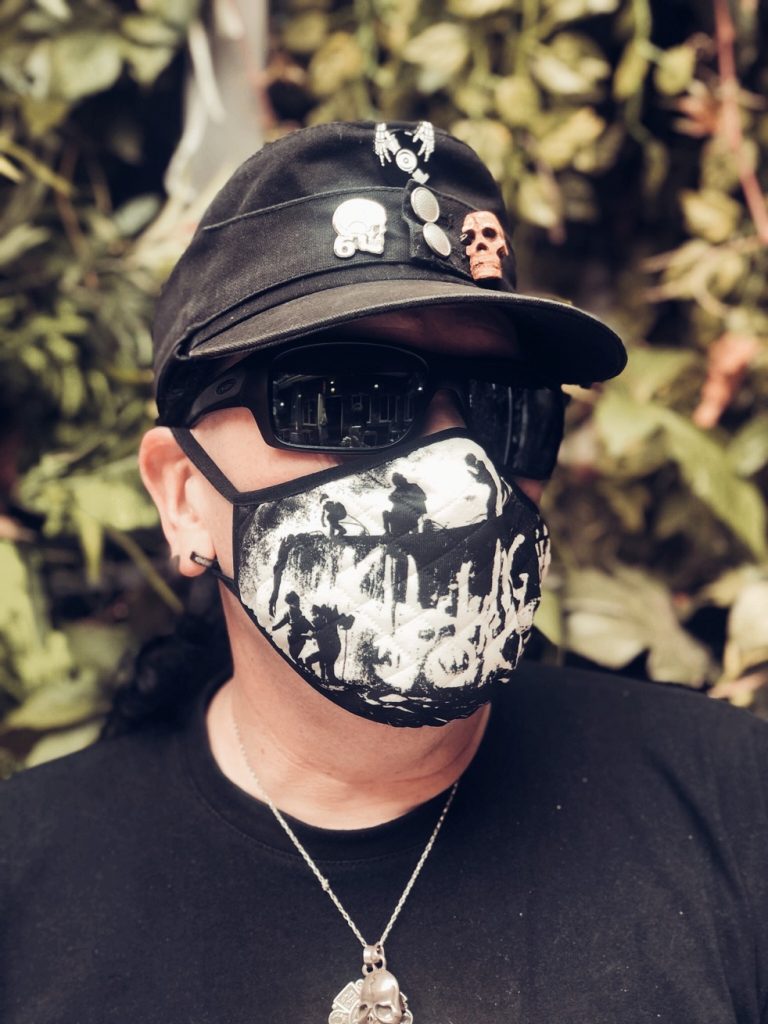 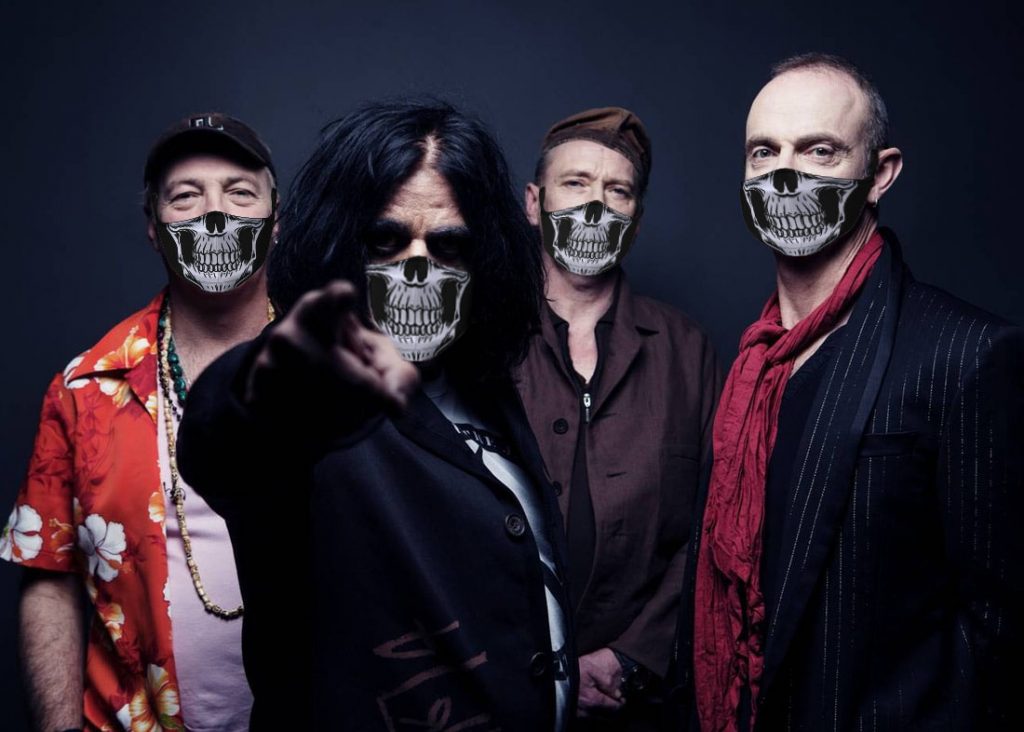 Even where measures have been introduced by Governments to prevent the spread and deaths from the virus, lack of strong action in enforcement has made these efforts futile. However security at music events have the power to enforce mask wearing and entrance with a test.

It’s time to stop tolerating this cancellation culture due to very poor support from Governments for the music industry across the world. You need to un-elect politicians who don’t support live music and clubbing. Stop supporting promoters who can’t show a written statement  from government officials that an event must be cancelled due to Covid. They should be asked for a refund and they are not worthy of support as they have had 2 years to get a grip. It may also be likely they may be anti vaxxers/covid deniers/cunts or they don’t want to accommodate mask wearing and testing and ensure safety as it costs money and time, still not a valid excuse.

I fully expect the Wave Gotik Treffen, Amphi festival, Mera Luna festival, NCN festival, and many more to go ahead in Germany – 2 years on there is no acceptable excuse to cancel anymore. I hope to get to as many events across the world as possible as well as some very special DJ events 😉 Despite the shit handling of the crisis by most governments over the last 2 years (some more than others) and failure to disclose the truth as the CCP doesn’t know what that is 😉

“A population In deep denial Contagion released From a Phial”

The virus was genetically altered to attack certain genes by scientists in the military bio lab in Wuhan, it was then leaked. It could have been accidental injection into a lab worker, a bite from an infected lab rat or the James Bond vile smuggled out and dropped in Wuhan market 😉 Due to so much trade dependent on China and governments scared of the implications, the CCP will never tell the truth, but if governments had stuck to it being released from a lab as bio weapon, I’m sure more people would have wised up and gotten vaxed.