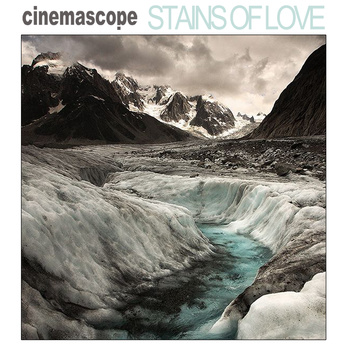 Cinemascope is a new/dark/cold wave project of Leo Skiadas based in Athens/Greece. The debut album Stains Of Love has been released on Wave records Brazil.
If you are a fan of The Cure or post punk/new wave then you are going to love this release! Better Days To Come is infectiously catchy with a driving curelike bass. Dark, punchy pop love it! A dancefloor smash! Never Understand is clearly one of the outstanding tracks on the album, epic and powerful programmed bass and drums, sprinkled keys and the most perfect simplied catchy guitar hook will see this be a dancefloor smash! Five More Minutes (feat Ronnie Moorings) has a more atmospheric new wave synth feel and will appeal to fans of early COX Great collaboration! Each Time sees a slight drop in tempo but yet another fine track to caress the ear before bursting into life. A Cure fans dream! Man Falls Down has a lot darker atmosphere than the previous tracks and possibly has musical echoes of Sisters Of Mercy floodland Love it! Breaking The Silence and the tempo increases with a classic 80’s new wave feel. This would have even been great in the 80’s! Slowly Beating Heart – keeps the 80’s postpunk flame alive. Sounds Of Revelation – From the sinister shadowy atmospherics emerges a classic song in a similiar vein to Posie Noire Epic! So Cold Inside great minimal new wave! Mind Assassin is the final track on the physical album has a classic cure pop feel! The digital version of the album features So Cold Inside (23rd Underpass rmx) which also been mixed in a classic 80’s new wave style very nice.
I am already looking forward to Cinemascope’s second album! Get Your copy from