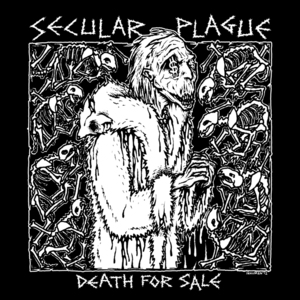 I was contacted by the band to write a review of their second album which follows hot on the heels of their self titled album released in May 2012. Both albums are available as free download through the innovative label Zorch Factory Records. This release is not about how big your mohawk is or calling yourself deathrock/postpunk just to be trendy. This release captures the intense spark of punk and reminds me very much of great bands like Dead Kennedys, Black Flag, The Exploited with a splash of The Ramones intensity. It has to be the shortest release that I have reviewed at on 13 mins 20 secs but the tracks are still long enough to leave a dent in your head. Antiworld also had some great short tracks which is why for me they were the best Deathrock band. For me Secular Plague is very much part of the New Dark Punk sound. My favourite tracks from the album are “Age Of Kali” (which I included in my last podmix), has a hint of The Ramones in the Rhythm,”Latter Days” love the driving tribalistic drumming and “Angry & Frustrated” which ensures the album ends with a bang.
Music to Pogo and slamdance to! Love it! Move over Deathrock New Dark Punk is here!